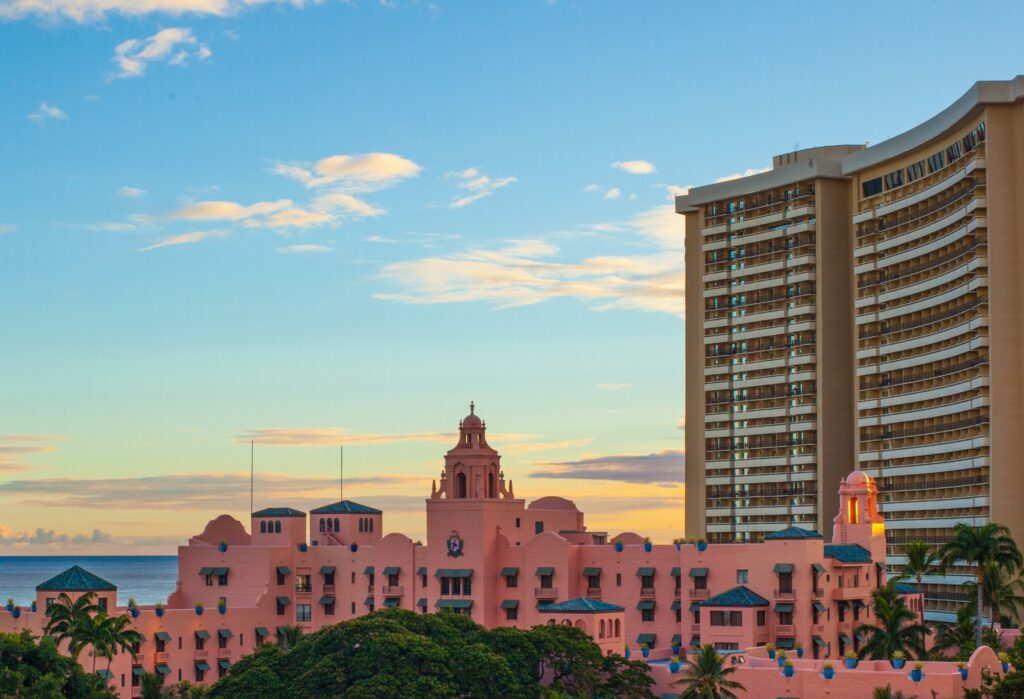 Fisheye Studio has been fortunate to film at the The Royal Hawaiian wedding venue in the recent past. We are also a a preferred vendor at this location. Because of all these reasons, it makes our list as a top Oahu wedding venue.

The Royal Hawaiian opened back in 1927. With its rich history, strong ambassador loyalty, and connection to Hawaiian culture, this historic Honolulu hotel is spectacularly located on the famed Waikiki Beach.

In addition, the resort was built for only $4 million. The six-story, 400-room structure was fashioned in a Spanish-Moorish style which was popular during the period. The first general manager of the hotel, Arthur Benaglia, presided over a staff of 300, including ten elevator operators and lobby boys dressed in “Cathayan” costume.

At the grand opening’s black-tie gala celebration, members of the Honolulu Symphony entertained over 1,200 guests at the $10-a-plate event-of-the-year. The Honolulu Star-Bulletin described the newly opened Royal Hawaiian as “the first resort hostelry in America.”

The most coveted spot on Waikiki Beach is at The Royal Hawaiian – within the billowing sanctuary of private beachfront cabanas or from luxurious guest rooms showcasing unrivaled panoramic views of Diamond Head, Waikiki Beach and the sparkling Pacific Ocean – we offer Hawaii’s most majestic and memorable experiences. Watch surfers catch waves during the summer when the swell is high. In the winter, calmer waves make for better swimming and exploring in the waters.

Lastly, don’t forget to get one of our world famous Mai Tai’s down by the ocean.

In addition, we recommend beginning with speaking to a wedding planner. For example, we recommend you speak with L4Love to help you as you begin the process of planning your wedding.